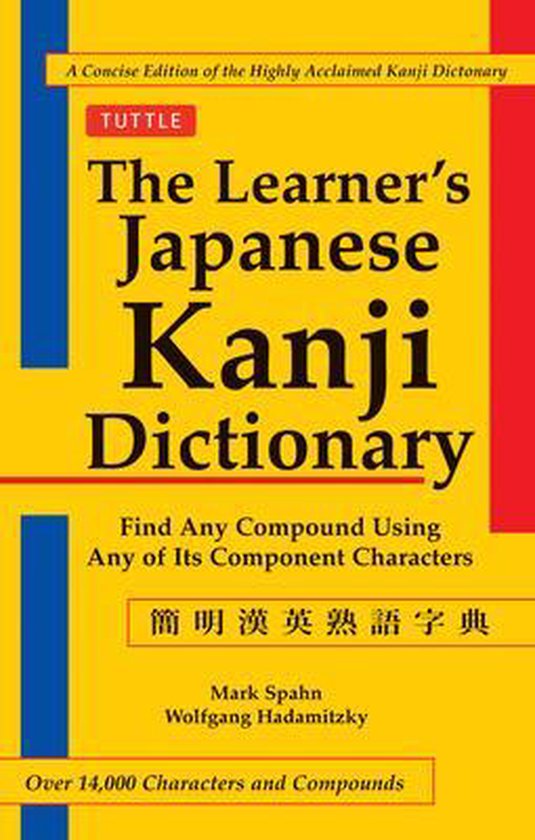 The authors have succeeded in the purpose of making it as easy as possible to look up the readings and meanings of Japanese words written in Chinese characters. --The Modern Language Library The purpose of this Learner's Kanji Dictionary is to offer a handy and easy-to-use Japanese language tool to look up the readings and meanings of Japanese words and names written with Chinese characters (kanji). Each kanji entry is presented in extra-large form, with its strokes labeled in order by small numbers 1, 2, 3, ... positioned at the beginning of each stroke to show how the kanji is to be written. Handwritten pen and variant forms of the kanji are also given, along with its general structure and graphemes. This dictionary is a concise version of the more comprehensive Kanji Dictionary. In all, this Japanese dictionary lists the most important 2,882 characters and 12,073 multi-character compounds, including all 1,945 Joyo Kanji decree for general use plus all 284 Jinmei-yo Kanji sanctioned for use in given names. In addition, the most frequently used approximately 700 surnames and 600 given names have been added. One feature that makes this dictionary particularly useful for a beginner, or anyone else wishing to learn Japanese, is that every compound is listed under each of its characters. This multiple listing makes it possible to look up a compound under whichever of its characters is quickest to find, and it is a big help in deciphering sloppy handwriting or a blurred copy. Entries are arranged according to a radical--based lookup system of the same type used in virtually all character dictionaries, but with improvements that make it particularly easy to learn and use. And with the alphabetically arranged index of kanji readings at the back of the dictionary, the user can look up a character via any of its known readings (or look up a compound via any of the readings of any of its characters), without having to determine radicals or count strokes. This handy character dictionary includes: 2,882 character entries and 12,073 compounds. Character entries are according to the system of 79 Radicals. English-Japanese and Japanese-English Sections Information about writing, form, structure, etc. of each of the characters. Approximately 700 surnames and 600 given names. An alphabetical pronunciation index.