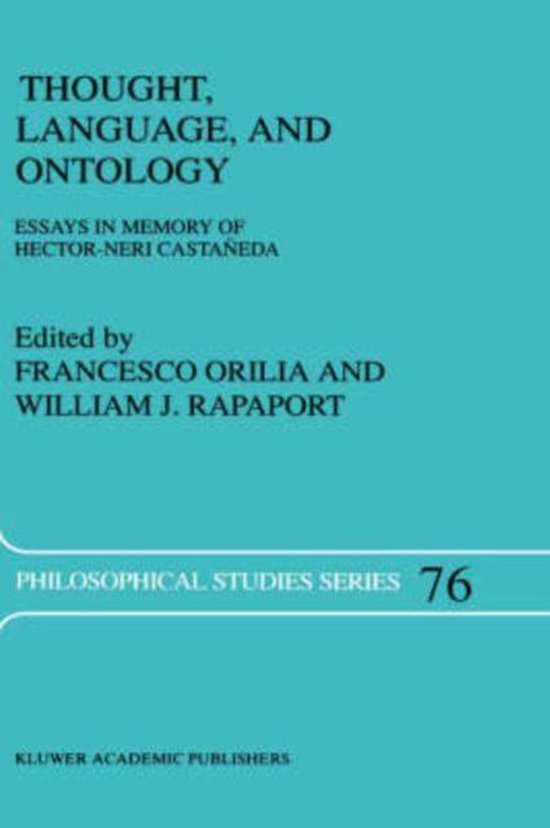 Thought, Language, and Ontology: An Introduction Francesco Orilia William J. Rapaport Dipartimento di filosofia e scienze umane Department of Computer Science, Universita di Macerata Department of Philosophy, 62100 Macerata, Italy and Center for Cognitive Science orilia@unimc. it State University of New York at Buffalo Buffalo, NY 14260-2000, U. S. A. rapaport@cs. buffalo. edu 1 DeRe Hector-Neri Castaneda, the Mahlon Powell Professor of Philosophy at Indiana Univer- sity, died on September?, 1991, at the age of66, after a year-long illness. In his lengthy and intense philosophical career, Castaneda deeply influenced analytic philosophy. In the last part of his life, he was also committed to spreading his views beyond the circle of analytic philosophy and to bridging the gap between analytic and so-called continen- tal philosophy, convinced as he was of the overall unity of good philosophical theoriz- ing. The importance and influence of his work is witnessed by three Festschriften ded- icated to him, which included critical examinations of his theories by leading philoso- phers, along with Castaneda's replies (Tomberlin 1983, 1986; Jacobi & Pape 1980). Castaneda's humanity and devotion to philosophy is evidenced in his fascinating autobiography, contained in Tomberlin 1986. He was also the founding editor of Nous, one of the world's best philosophical journals, now published by Blackwell Publishers. From the beginning, Nous emphasized the analytic tradition in philosophy, but has al- ways been open to all kinds of serious philosophy, as its Latin motto witnessed: Nihil philosophicum a nobis alienum putamus.