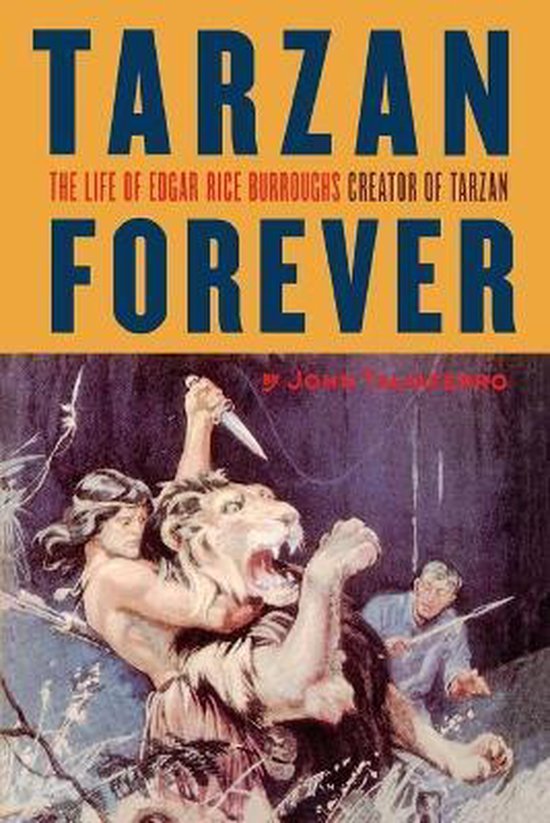 When Tarzan of the Apes was published in The All-Story in 1912, Edgar Rice Burroughs was just another would-be writer struggling to support himself and his family by penning adventure stories for readers of "the pulps," the cheap mass-market magazines popular at the time. When he died in 1950, he was the bestselling author of the twentieth century, overseeing interests that spanned publishing, movies, radio, newspaper syndication, toys, even real estate. He had millions of enthusiastic readers around the world and had earned the respect of magazines that never published his stories: The Saturday Evening Post admitted of Burroughs's writing, "There are pages of his books which have the authentic flash of storytelling genius." He was, in short, a publishing wonder who had unexpectedly created the century's first superhero, Tarzan -- a pop-culture icon that has known few rivals.

In Tarzan Forever: The Life of Edgar Rice Burroughs, Creator of Tarzan, John Taliaferro vividly recounts the remarkable life and career of the originator of Tarzan. Drawn extensively from Burroughs's own correspondence, memos, and manuscripts, Taliaferro's richly detailed narrative reveals how Burroughs, a down-on-his-luck Chicago pencil-sharpener salesman, first wrote about his most famous character, how he grasped the appeal of this "feral god," and how be spent the rest of his life nurturing and protecting it. Burroughs, Taliaferro explains, was a pioneer of synergy: His cross-promotional and marketing efforts helped sustain Tarzan's popularity for decades and increased Burroughs's readership far beyond North America. In the course of his career, Burroughs wrote scores of other books and stories, including westerns and adventures set on Mars, Venus, and at the Earth's core. In an attempt to graduate from the pulps, he made several stabs at the modern genre of social realism, though inevitably his editors and fans drove him back to his tried-and-true -- more Tarzan tales. Even today, a half-century after Burroughs's death, the character of Tarzan thrives; the arrival of Disney's animated Tarzan is only the latest manifestation.

Important as Tarzan was to Burroughs, Taliaferro makes clear that Burroughs's life was at least as colorful as the life of his jungle creation. Burroughs was a cavalryman in the Arizona Territory, a cowboy in Idaho, a speculator in Southern California real estate, a Hollywood producer, a witness to the bombing of Pearl Harbor, and even a war correspondent in the South Pacific. Unlike Tarzan, though, Burroughs was far from the ideal balance of nature and nurture. He failed at two marriages, and despite the enormous popularity of his books and MGM's Tarzan movies of the thirties and forties, his lavish appetites forever pushed him to the brink of bankruptcy. Shaky finances ultimately drove him to develop his beloved California ranch, Tarzana, into the town of Tarzana, a Los Angeles suburb that today stands as the antithesis of Tarzan's African paradise. Quick to speak out on the controversial issues of his day, Burroughs wrote essays and stories advocating eugenics, the extermination of "moral imbeciles," and the deportation of Japanese-Americans during World War II.

In Tarzan Forever, Taliaferro captures all of Burroughs's gifts and flaws, his contradictions and complexities. The result is a deeply satisfying look at one of the architects of today's popular culture.