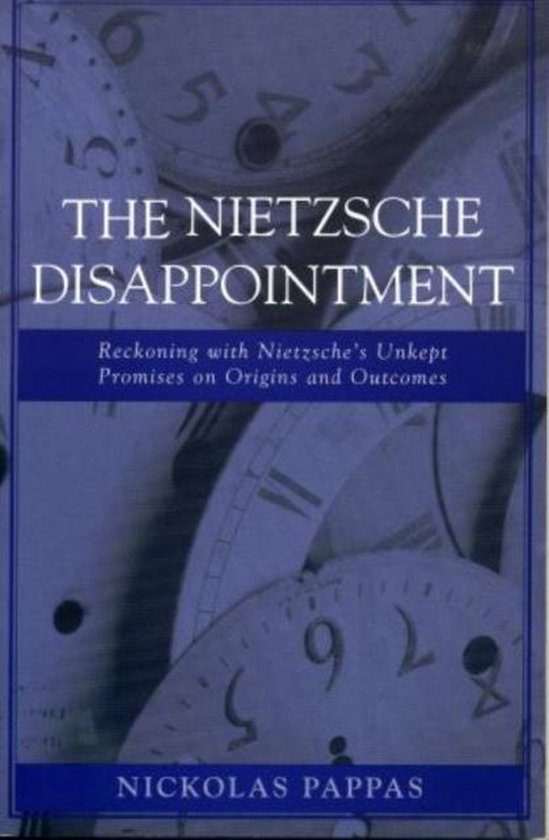 The Nietzsche Disappointment examines the workings of time in NietzscheOs philosophy. It asks how he explains the great changes that (according to him) turned the past into the present _ catastrophic transformations of morality, language, human nature _ or that may yet make a desirable future out of this sorry present age. The question is essential. Nietzsche attacks morality by appeal to the past and future. Where philosophy had fancied itself eternal, imagining all times to be more or less like the present, Nietzsche sets the subject in motion with his attention to abrupt, utterly consequential events. Everything eternal becomes temporal. But after whetting his readersO appetites for past and future cataclysms, Nietzsche makes them seem impossible. Birth of Tragedy raises the question of where Socrates could have come from _ and then canOt answer. In Beyond Good and Evil Nietzsche pins his hopes on the birth of future philosophers, even as he shows how many obstacles prevent their being born. On the Genealogy of Morals posits occurrences, like the triumph of slave morality, that violate NietzscheOs own claims about what can happen. What stops Nietzsche from telling the very stories that he wanted philosophy to attend to? Perhaps that question canOt be answered without considering how Nietzsche understands his own place in the flow of time _ considering, for instance, his wish to be an original philosopher. The Nietzsche Disappointment is both critical and sympathetic. It interrogates Nietzsche in terms that he should understand; it closes by asking whether there is some way of being critical that is also self-critical. For then a good reading may free the reader from NietzscheOs person while continuing to confront the challenge he bequeathed to philosophy.