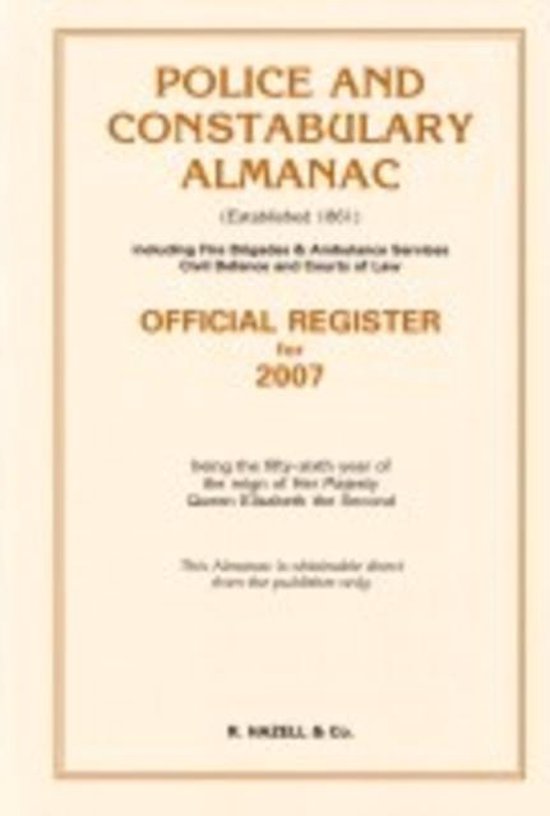 First published in 1861, the Police and Constabulary Almanac is the only authoritative reference work which contains the addresses, telephone numbers and personnel of Home Office and Police Organisations, of Police Forces in England, Wales, Scotland (with maps of Police areas), Northern Ireland, the Isle of Man, the Channel Islands and the Irish Republic; of Ministry of Defence Police, the Services Police, British Transport Police, Airports, Harbours and Docks Police, HM Revenue and Customs, the Gambling Commission, Racecourse Security; Courts, Prisons, Young Offender Institutions, Remand Centres, Police Charities; Associations, etc.; addresses of Motor Licence Authorities; and, a Motor Index. Fire Brigades, the regional organisation of Ambulance Services in the United Kingdom (with addresses and telephone numbers) and the organisation of Civil Defence and Emergency Planning, together with an extensive Gazetteer of places and Police Stations in the United Kingdom, cross-referenced with Police Forces, and a detailed index complete this valuable work of reference. This is an essential work of reference for the police, central government, defence staff and the services, security personnel, local authorities, courts, solicitors and large industrial and commercial companies. Significant improvements have been made to the layout of the 2007 edition, in particular to the presentation of police force entries. These pages have been enhanced and restructured, to facilitate location of specific departments and personnel and to promote ease of use.