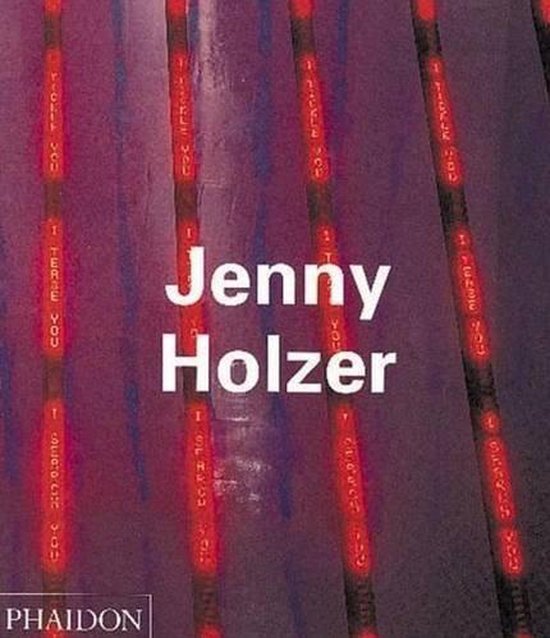 Jenny Holzer (b.1950) is one of the most significant artists to work in the public realm since the 1980s. Starting on the streets of New York with simple fly-posters, she has gone on to disseminate her truisms, slogans, memorials and poems through a variety of media. They are enunciated by an unstable register of personae, be it ad-man, stand-up comedian, torturer, victim or evangelist. The sites for her work range from T-shirts and golf balls to dazzling electronic signboards at baseball stadiums. Her work uses language to investigate the nature of ideologies as conscious and unconscious formations about identity and experience. Her complex and poetic texts can be shocking, humorous and intriguing in content. At the same time she draws on Minimalism's use of industrial materials and deploys scale, movement and light to create art of great formal power and beauty. In the Survey, art critic and academic David Joselit surveys Holzer's changing oeuvre, from the first appearance of the streetwise Truisms in the late 1970 to her large-scale installations in museums worldwide. Joan Simon, curator of Holzer's first solo US museum exhibition, discusses with the artist her use of language and its relationship to visual form. In the Focus, Slovenian cultural theorist and philosopher Renata Salecl takes an in-depth look at Holzer's Lustmord series, which was precipitated by the events in the former Yugoslavia and boldly addresses the atrocities committed in war. For the Artist's Choice, the artist's fragmented, unexpected language is mirrored in Samuel Beckett's Ill Seen Ill Said, which the artist has chosen alongside extracts from Crowds and Power by Elias Canetti. A text by the artist on her literary influences accompanies a selection of her signature texts in the Artist's Writings section.