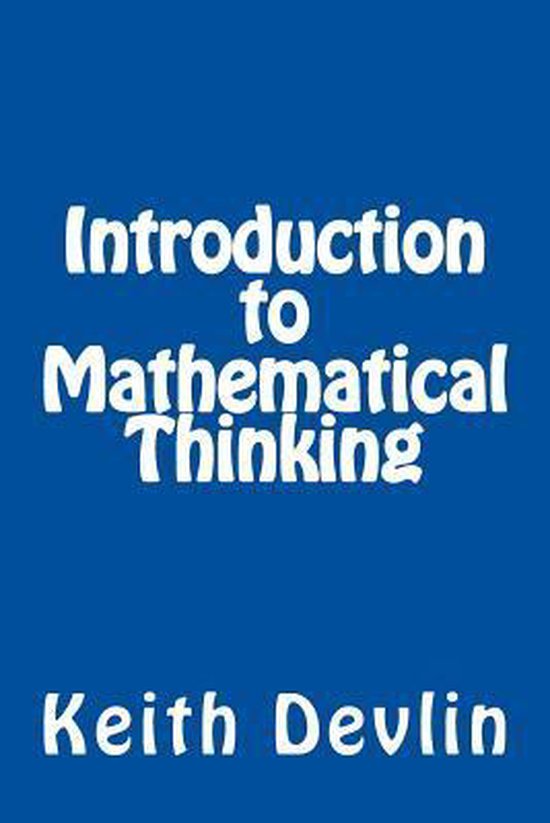 In the twenty-first century, everyone can benefit from being able to think mathematically. This is not the same as "doing math." The latter usually involves the application of formulas, procedures, and symbolic manipulations; mathematical thinking is a powerful "way of thinking" about things in the world -- logically, analytically, quantitatively, and with precision. It is not a natural way of thinking, but it can be learned. Mathematicians, scientists, and engineers need to "do math," and it takes many years of college-level education to learn all that is required. Mathematical thinking is valuable to everyone, and can be mastered in about six weeks by anyone who has completed high school mathematics. Mathematical thinking does not have to be about mathematics at all, but parts of mathematics provide the ideal target domain to learn how to think that way, and that is the approach taken by this short but valuable book. The book is written "primarily" for first and second year students of science, technology, engineering, and mathematics (STEM) at colleges and universities, and for high school students intending to study a STEM subject at university. Many students encounter difficulty going from high school math to college-level mathematics. Even if they did well at math in school, most are knocked off course for a while by the shift in emphasis, from the K-12 focus on mastering procedures to the "mathematical thinking" characteristic of much university mathematics. Though the majority survive the transition, many do not. To help them make the shift, colleges and universities often have a "transition course." This book could serve as a textbook or a supplementary source for such a course. Because of the widespread applicability of mathematical thinking, however, the book has been kept short and written in an engaging style, to make it accessible to anyone who seeks to extend and improve their analytic thinking skills. Going beyond a basic grasp of analytic thinking that everyone can benefit from, the STEM student who truly masters mathematical thinking will find that college-level mathematics goes from being confusing, frustrating, and at times seemingly impossible, to making sense and being hard but "doable." Dr. Keith Devlin is a professional mathematician at Stanford University and the author of 31 previous books and over 80 research papers. His books have earned him many awards, including the Pythagoras Prize, the Carl Sagan Award, and the Joint Policy Board for Mathematics Communications Award. He is known to millions of NPR listeners as "the Math Guy" on "Weekend Edition" with Scott Simon. He writes a popular monthly blog "Devlin's Angle" for the Mathematical Association of America, another blog under the name "profkeithdevlin," and also blogs on various topics for the Huffington Post.