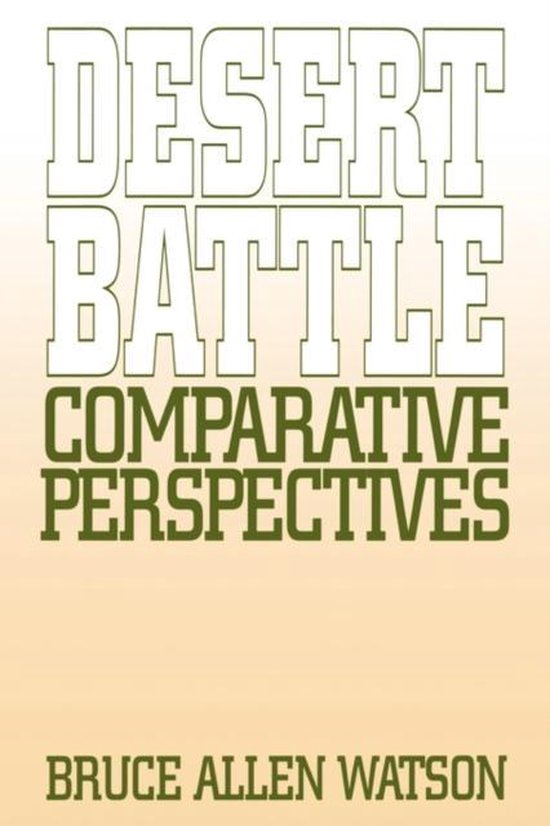 Desert Battle is a study of the nature of desert warfare with special attention to the evolution of weaponry, the organization of forces, the impact of the desert environment on the ability of those forces to sustain battle, and the influences of the desert on battle tactics. The work concentrates on seven campaigns, from Bonaparte's adventure in Egypt in 1798-1799 to the 1991 Gulf War. Each campaign is discussed in relation to its political-military background, with focus on leadership, the forces available, and the weapons at their disposal. A narration of each campaign follows, ending with an evaluation in relative degrees of the leadership, weapons, and tactics and the long-run consequences of the campaign. Watson's study opens with a description and analysis of Erwin Rommel's first advance in North Africa in April of 1941, but his emphasis is not on Rommel's magnificent achievements but on the creation of the Rommel legend and its effect on our understanding of desert warfare. That opening chapter is followed by an examination of deserts as a physical context for battle-the nature of the environment and who fights in deserts and why. Napoleon Bonaparte's campaign in Egypt, 1798-1799, is discussed in the context of desert campaigns. British operations along India's Northwest Frontier from 1849-1852 follow. The Tigris campaign of World War I is particularly notable because it introduced armored cars, thereby increasing an army's mobility in desert sands. The British counterattack against the Italians in North Africa from late 1940 to early 1941 demonstrates how a small army, utilizing surprise, indirect attack, and high mobility, were able to offset the Italians' numerical superiority. Post-World War II battle is illustrated by the Yom Kippur War between the Arabs and the Israelis in 1973. The final campaign discussed is the 1991 Gulf War. Watson's original conclusions about the nature of desert battle and the constants that determine the outcome of battles in that hostile environment are surprising and illuminating. They constitute a real contribution to the study of desert warfare.