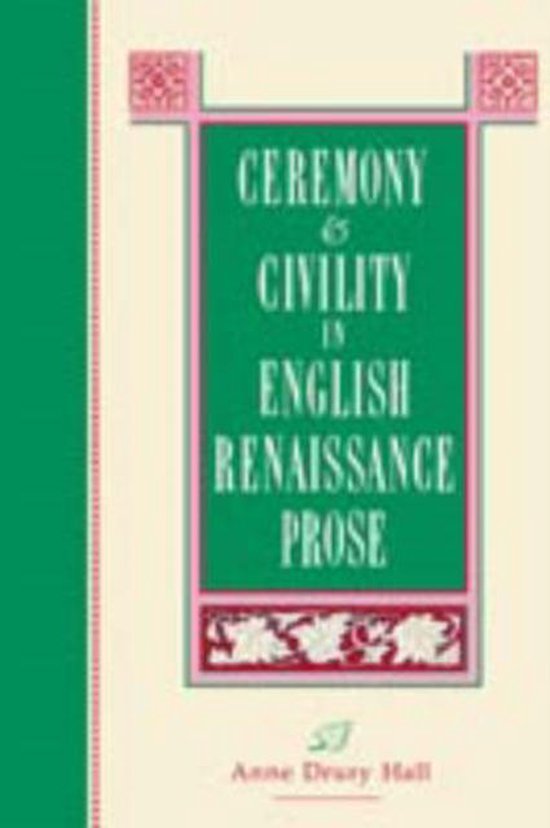 Ceremony and Civility in English Renaissance Prose analyzes the emergence of civil prose in texts of the early modern period and defends English Renaissance writers against the current attack on their aristocratic politics. Using Thomas More's History of King Richard III, Philip Sydney's Defense of Poetry, Richard Hooker's Laws of Ecclesiastical Polity, and Thomas Browne's Religio Medici, Anne Hall demonstrates the emerging differentiation of civil and ceremonial prose in the early modern period. These works combine ceremonial discourse, acknowledging such traditional values as a God-centered world, and civil prose with its circumspections and irony, thus revealing a philosophical awareness of the complexity of moral and political questions. Since the 1970s, there have been two chief arguments about Renaissance literature. The first is that most Renaissance writers used traditional forms to bolster authority and that they should be regarded with suspicion. The second is that some Renaissance writers altered traditional forms to subvert authority and that they should be admired. Anne Hall contends that there is an alternative position-that many Renaissance writers used tradition to bolster authority and that their versions of tradition and authority deserve a defense that responds to current attacks on their racism, violence, and colonialist repression in texts that were once thought to be about love and education. Hall argues that Renaissance writers could not foresee the ways in which they would need to defend their position against Enlightenment attack, and she supplies what she believes would have been their defense, concluding that such Renaissance discourse must not be considered solely on a historical basis but also from a philosophical viewpoint.