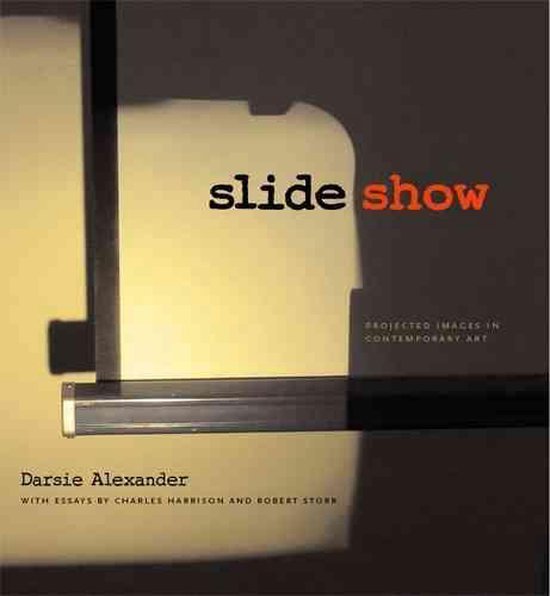 New babies just home from the hospital, children cavorting under the Christmas tree; weddings, receptions, birthday parties-these and many other happy memories live on through the magic of color slides. -Kodak instruction manual, 1967 Interview with Darsie Alexander, Curator, BMA, August 2004 Since the Renaissance, most art has been prized because of the prodigious skills that went into its making. Why would any artist choose to work with slides? It's tempting to see slide projection as quick and easy. Indeed, many artists cite these qualities when explaining their initial attraction to the medium. But the process can be complicated, involving not only the creation of the transparency itself but also its arrangement, projected scale, and timing. A single carousel may contain as many as eighty images that must be numbered and ordered, a task that grows all the more complicated with the addition of each new slide grouping. When we rediscovered a piece by one of the performance artists in the exhibition, I thought he was going to cry. The prospect of putting the whole complex thing back together was painful, even though he was delighted to see his work again. Of course, slide projection is low-tech and notoriously accident-prone. But I think the medium owes a lot of its immediacy to its tendency as an apparatus to jam, to burn out a bulb, to turn a well-planned show into a logistical nightmare. Good art often courts disaster. Is the development of slide art connected to the ferment of the 60s? During the 1960s and 1970s, public projection of slides became a vehicle for social and political activism. Slide projection's portability made this possible, enabling artists (Krzysztof Wodiczko, for example) to project powerful, challenging images onto public buildings. When Lucy Lippard wanted to publicize the exclusion of women from the Whitney Annual of 1970, she projected slides against the surface of the museum to protest its curatorial policies. This application of slides as critical commentary had historical precedents: in the 1880s, the photographer Jacob Riis used slides of the urban poor to arouse the concern of people who might have been able to help. Did the strong associations of slides with family entertainment have any impact on the ways artists adapted the medium? The fact that the medium promotes a collective viewing experience is important for both artists and popular users. The act of looking at images, especially still photographs, generally involves a single spectator and a stationary object, but with slides you are often sitting in the same room with other people, sharing the experience with them. People who watch Nan Goldin's The Ballad of Sexual Dependency, for example, find themselves on the same emotional roller coaster. It's like the family slide show in a way; people participate in a joint emotional response to images of past events. Of course, the memories and feelings such a work stimulates are different for everyone, and that is the reason The Ballad is such a great piece. Marcel Proust as well as Ingmar Bergman have called attention to the mesmerizing power of the magic lantern shows they saw as children. Is there any connection between those shows and slide shows by such artists as Dennis Oppenheim or James Coleman? Projection is a mysterious process that evokes all kinds of fantasies. The ancient meaning of the term to project is related to the alchemical process for changing base metal into gold. Nearly every artist I interviewed remembers being fascinated by shadows on the wall as a kid, or lying in the dark using the beam of a flashlight to make patterns in the darkness. An artist like James Coleman extends this magical experience to viewers by manipulating the transformative properties of slides as images that are not quite real; indeed, the projections themselves are totally intangible. But all the works in the exhibition invite viewers to read meaning into translucent pictures. Is slide technology a thing of the past? Over the past five years, at least, PowerPoint presentations have supplanted slide shows. PowerPoint facilitates overlays, dissolves, syncopated fades, and collage. As consumers, we have become accustomed to a barrage of images and are easily bored. No matter how fancy your equipment, slide projection will always seem a slower, more regulated process. Slides and slide projectors are generally a monocular form of vision and, though users can combine projectors to multiply the frames they project, it is rare that people-including artists-use more than two. And please remember: anyone who would like to use a projector must go to the secondhand market. The last slide projector was manufactured in September 2004. How does the book SlideShow relate to the SlideShow exhibition? I am not trying to replicate the exhibition in a book; that's impossible! The book cannot but give its reader a visual experience radically different from that afforded viewers of the exhibition. I think of the book SlideShow as a document, an expansion, a reflection, an interrogation of SlideShow the exhibition.