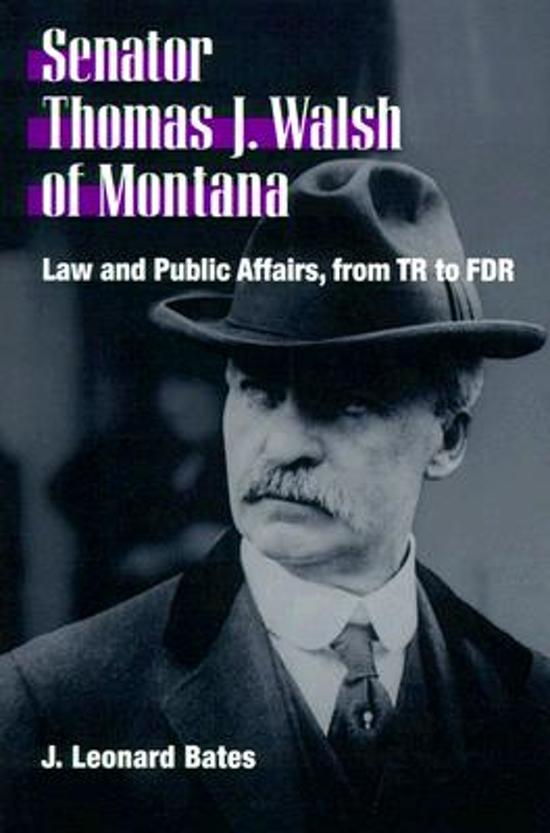 This is the first comprehensive biography of Thomas J. Walsh, the Democratic senator from Montana from 1913 to 1933 who was best known for his role in uncovering the Teapot Dome scandal. J. Leonard Bates places Walsh in his colorful and tumultuous times, illuminating Montana history and politics as well as national movements including Progressivism, internationalism, Prohibition, war, and so-called normalcy. Walsh fought throughout his long career against corruption and monopoly power. During his early years as a lawyer-politician in Helena, he was often in conflict with the Copper Kings and other powerful figures. As a senator, he became an internationalist, working throughout the 1920s for naval disarmament, the World Court, the St. Lawrence Seaway, and the Kellogg-Briand Pact for the outlawry of war. In his most celebrated coup, breaking open the Teapot Dome scandal of 1923-24, Walsh revealed that the secretary of the interior had accepted loans from oil men in return for leases of U.S. naval oil reserves. Working through the Public Lands Committee of the Senate, Walsh enjoyed support for his investigation from members of both parties, and the Supreme Court endorsed his interpretation of the scandal in 1927. Shortly before his death, he presided over the Democratic National Convention that nominated Franklin Roosevelt and served for a brief time as a key figure in the new leader's circle. Drawing on archival sources of unprecedented depth, including personal letters between Walsh and his first wife, Elinor McClements Walsh, Bates's expansive study paints a richly detailed portrait of an influential and principled figure whose political career spanned world war, depression, and the administrations of six presidents.