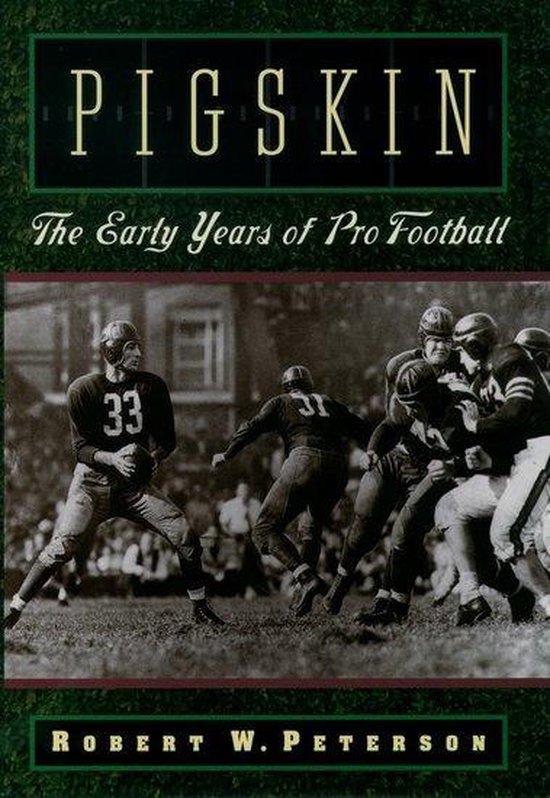 If the National Football League is now a mammoth billion-dollar enterprise, it was certainly born into more humble circumstances. Indeed, it began in 1920 in an automobile showroom in Canton, Ohio, when a car dealer called together some owners of teams, mostly in the Midwest, to form a league. Unlike the lavish boardrooms in which NFL owners meet today, on this occasion the owners sat on the running boards of cars in the showroom and drank beer from buckets. A membership fee of $100 was set, but no one came up with any money. (As one of those present, George Halas, the legendary owner of the Chicago Bears, said, I doubt that there was a hundred bucks in the room. ) From such modest beginnings, pro football became far and away the most popular spectator sport in America. In Pigskin, Robert W. Peterson presents a lively and informative overview of the early years of pro football - from the late 1880s to the beginning of the television era. Peterson describes the colorful beginnings of the pro game and its outstanding teams (the Green Bay Packers, the New York Giants, the Chicago Bears, the Baltimore Colts), and the great games they played. Profiles of the most famous players of the era - including Pudge Heffelfinger (the first certifiable professional), Jim Thorpe, Red Grange, Bronko Nagurski, and Fritz Pollard (the NFL's first black star) - bring the history of the game to life. Peterson also takes us back to the roots of the pro game, showing how professionalism began when some stars for Yale, Harvard, and Princeton took money - under the table, of course - for their services to alma mater. By 1895, the money makers - still unacknowledged - had moved to amateur athletic associations in western Pennsylvania and subsequently into Ohio. After the NFL formed in 1920, pro football's popularity grew gradually but steadily. It burst into national prominence with the Bears-Redskins championship game of 1940. As one sportswriter put it: The weather was perfect. So were the Bears. The final score was 73-0. Peterson shows how, after World War II, the newly-created All America Football Conference challenged the NFL. Though dominated by a gritty Cleveland team, the AAFC was never viewed by NFL teams as much of a threat. That is, not until 1950 when the two leagues merged, bringing about the Cleveland Browns-Philadelphia Eagles game in which the Browns buried the Eagles 35-10. An elegy to a time when, for many players, the game was at least as important as the money it brought them (which wasn't much), Pigskin takes readers up to the 1958 championship game when the Baltimore Colts beat the New York Giants in overtime. By that time, the great popularity of the game had moved from newspapers and radio to television, and pro football had finally arrived as a major sport.