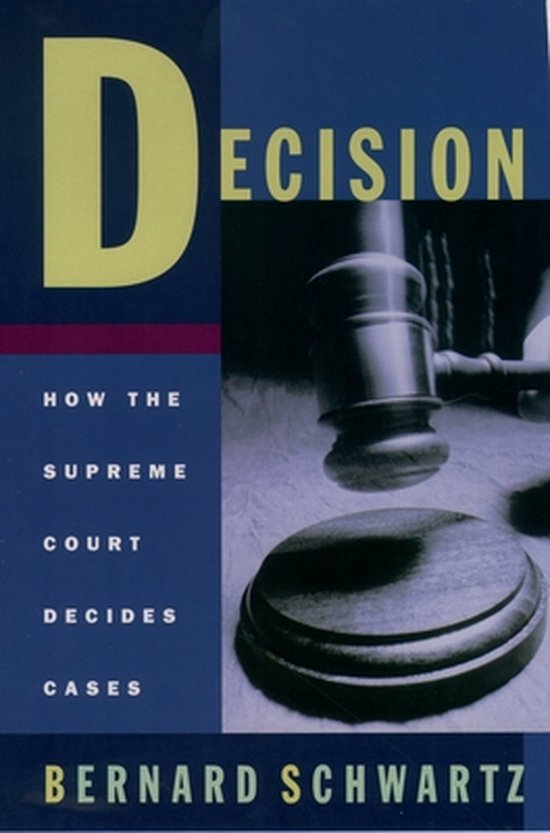 Decision days appear to outsiders as among the most dramatic events on the Supreme Court calendar. One thinks, for instance, of Chief Justice Earl Warren, reading the unanimous opinion in Brown v. Board of Education in a courtroom pervaded by tension. But the real drama of Brown and other Supreme Court cases may well have been what went on behind the scenes. Rarely do the arguments of counsel-brilliant though they may appear to the courtroom audience-dictate the decision in an important Supreme Court case. Rather, the crucial argument in a case takes place privately among the Justices after the public hearing. Decision provides a unique behind-the-scenes look at the Supreme Court and how its Justices decide cases. Distinguished author Bernard Schwartz, described by The New York Times as one of the nation's leading legal scholars, uses confidential conference notes, draft opinions, memoranda, letters, and interviews to tell what really goes on behind the red velour curtain. Cases and anecdotes, woven into deft discussions of the Justices and how they function, provide unmatched insights into our high tribunal. We read of the conferences where the Justices cast their votes, the decisions as to who will write opinions (one of the most critical choices made by the Chief Justice), the often extensive give and take of the draft opinion, and the intense lobbying between Justices that influences vote changes (it was Chief Justice Earl Warren's pressure on Justice Reed in Brown that made the final vote unanimous). Schwartz focuses on the Warren, Burger, and Rehnquist courts, providing not just vivid portraits of the Chief Justices themselves, but also profiles of many Associate Justices in action-including Felix Frankfurter, Byron R. White, Sandra Day O'Connor, William J. Brennan, Thurgood Marshall, and John Paul Stevens. And Schwartz includes an eye-opening discussion of the expanding role of the Justices' clerks, revealing that they are no longer merely a staff of assistants. Instead, they have evolved into a sort of Junior Supreme Court, which performs a major part of the judicial role-including the writing of opinions-delegated by the Constitution to the Justices themselves. Decision gives readers a privileged look at countless cases throughout the Court's history, from the Dred Scott decision to Miranda v. Arizona to the controversial decision in Roe v. Wade to United States v. Nixon (the Watergate tapes case). Highly readable, yet written with impeccable scholarship, Decision shows the Justices in action as never before. Everything you wanted to know about the Supreme Court and were afraid to ask is here, in a revealing work on the institution that has had such an impact on our law and our life.